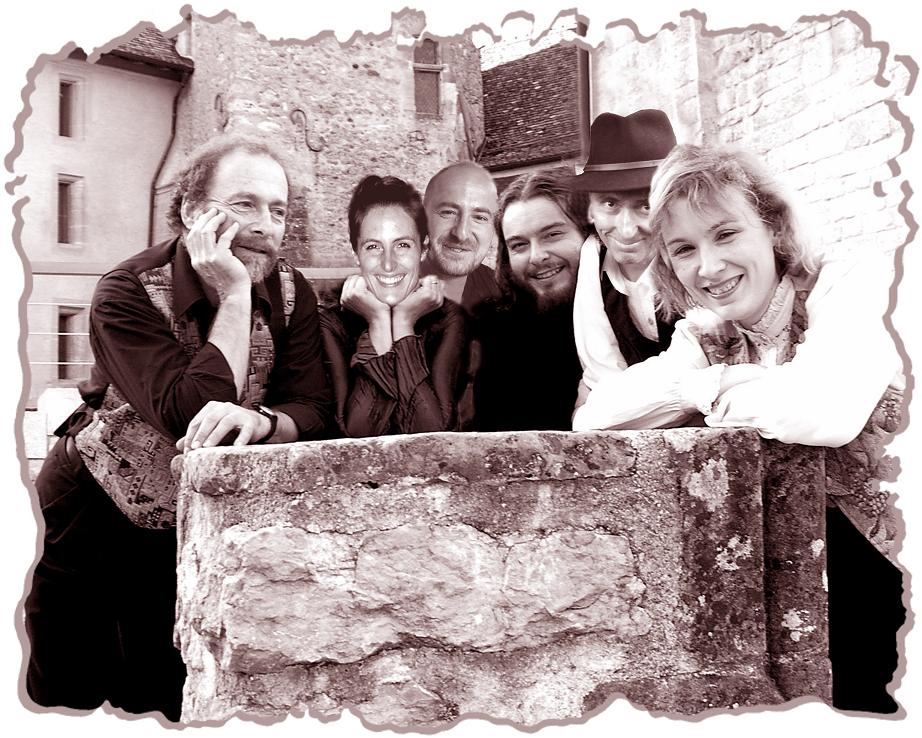 After their expulsion from Spain in 1492, the Sephardic Jews, enriched with the ancient traditions of Al Andaluz, will scatter and influence the cultural life of the entire Mediterranean basin, particularly in cities such as Tetouan, Fez, Salonica, Izmir, Istanbul and Sarajevo.

Part of the immense cultural heritage of the Jews, Sephardic songs and music are heavily steeped in indigenous folk music. If tradition extends back to Spain from the 15th century, musical creativity is the result of a recent artistic mixing. So many places, so many music and poems, inscribed in memories. Their only commonality is their eclecticism, their charm and their ability to evoke all the emotions.

Forsaking -for a short period- their beloved  KLEZMER music and Yiddish language, HOTEGEZUGT and Anne-Claire MONNIER are pleased to present their new program of Judeo-Spanish instrumental music and songs which perpetuates the tradition without freezing it...

The tradition of Jewish liturgical chant dates back to Biblical era. But the profane Jewish singing acquired its breadth and diversity in the Diaspora, through the cultural and musical influence of the various cultures with which the Jewish communities were -willingly or by force- in contact. Just as poetry, Sephardic music remained the privileged witness of the strange adventure of the Jews from the Iberian Peninsula who successively underwent tolerance, success, persecution and deportation. In spite of dispersion and acculturation, Jews have preserved their language and specific cultural values.

Sepharad is a Hebrew word meaning ‘Spain’. Sfaradim refers to the descendants of the Jews from the Iberian Peninsula. At the time of Islamic rule over Spain (from 8th to mid 13th century), a large Jewish community lived there. Apart from short times of persecution and forced conversions, Jews were economically useful and, tolerated as such, they participated -together with Muslims and Christians- to a real scientific and cultural symbiosis, from which emanated great names like Maimonides, Averroes or Alfonso the Wise. The 12th century can be considered as a "golden age", as Jewish communities depended only on the king and had a large administrative and judicial autonomy. Each center of the Spanish Judaism, particularly in Andalusia (Cordoba, Granada, Malaga, Sevilla, Toledo, etc.) had his own poetic style and its specific musical tradition.

The Inquisition, established in the mid-15th century, accused many ‘conversos’ (converts, contemptuously nicknamed ‘Marranos’, pigs) of practicing secretly their old religion and never ceased to prosecute them.

Failing their property, the expelled took with them their cultural heritage, their language, their songs and stories, a major source of spiritual enrichment, which were transmitted, particularly by women, from generation to generation.

For five centuries they preserved their language, the Judeo-Spanish (also called, spaniol, spanioliko, djidio, djudesmo or khaketia in Morocco, yahudice in Turkey or ladino), a medieval Spanish enriched with Hebrew words (like Yiddish but to a lesser extent), and subsequently with many words borrowed from the languages of the cultures of residence (Turkish, Greek, Arabic, French).

The Judeo-Spanish songs have undergone a similar destiny. As countless Jewish writings were destroyed by order of the Church, it is now impossible to know exactly what the Judeo-Spanish music sounded like in the 14th century. If some texts and lyrics date back to the Middle Ages and Renaissance (and are used today for research on medieval Spanish literature!), most of them are newer, having even been borrowed from the cultures of the host countries or, through travelers, from modern Spain.

Formerly, as liturgical chants in Hebrew, Aramaic or Judeo-Spanish were mainly sung by men, the women used to sing privately ballads and romances, a cappella or accompanied by a percussion (except on Shabbat or 'yom tov' ! The songs were adapted to various circumstances of life: birth, rocking, bar-mitzvah, shared or disappointed love, wedding, family matters, separation, death... or related to the calendar: Shabbat songs, coplas of Purim, lamentations for Tisha be'av, par-liturgical piyutim, etc. In addition to this mix of sacred and secular themes, one can find lyrical poems, themes out of the real life (i.e. the big fire in Salonika  in 1917), parodies, satires and even bawdy songs.

Expressing a wide range of feelings and emotions -ranging from the noblest and the most heroic to the most tragic and vulgar-, their concise and -at first sight- simple style contains lots of allusions and implicit formulations, whose understanding requires listener’s active participation. This constantly enriched directory enabled and still allows Sephardic Jews to affirm their culture: Jewish and Spanish.

In the 20th century, the oral transmission of traditional Judeo-Spanish songs was brutally interrupted by the destruction of important Sephardic communities during the Holocaust, but, like Yiddish songs and klezmer music, this legacy raises since the 1970s a renewed interest all around the world. The advent of recordings and the concept of ‘concert’ have led to new interpretations (Baroque, Flamenco...), often by male and sometimes accompanied by modern instruments (guitar, tablas…), sometimes without any direct link to the tradition. But their artistic quality and their emotional potential are worth our attention...