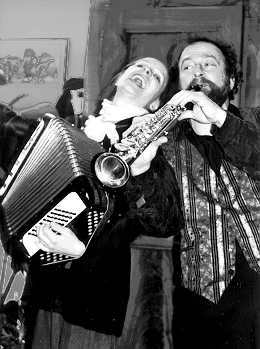 " ROJINKES mit MANDELN" meaning "raisins et almonds" in Yiddish, is the title of a famous song Abraham Goldfaden wrote around 1880 for the operetta "Shulamis", and the first song we played together. The duo "Rojinkes mit Mandeln" performs regularly since 1997 at "simches" and concerts around Geneva (Switzerland).

Marie-Claire STAMBAC
Being graduate in piano at the Conservatory of Neuchatel and in dance at the Jaques-Dalcroze Institute of Geneva (Switzerland) 1982, I am known as comedian, singer, dancer and musician, in Switzerland, in the United States, in Australia and in Holland, where I worked with Josef van den Berg. I perform regularly with various theater companies in Switzerland (like "Spirale", "La Grenouille" and "Les Marionettes de Geneve") and with the singer Roger Cuneo. I also give private lessons and workshops about voice and body expression.

Michel BORZYKOWSKI
Born in Geneva (Switzerland) from parents Polish Jews survivors of the Shoah, MD since many years and music lover since I was born, I discovered an old saxophone in a cellar and the pleasure to play on it a few years ago! In the 1975s, I joined some jazz ensembles (i.e. the "Pumpkin Quartet" and Alain Guyonnet's "Love and Soda"). Since 1996, I take up my cultural origins and work essentially on klezmer music with the bands "Hotegezugt" and "Rojinkes mit Mandeln". Since 1997, I'm active in the staff of the cultural association

AMJ (Friends of Jewish Music) in Geneva, Switzerland and have lead a klezmer music workshop in Geneva.