The show was already presented in the 'Grange à Dede' (Soral), at the Saint-Pierre Church (Gaillard, France), at the Music Festival, stage of the AMJ (Friends of Jewish Music,) at the Hotel of Mauvoisin (Wallis), on the Arteplage of Yverdon for Expo-02 and at the Theater of the Parfumerie (Geneva, Switzerland). 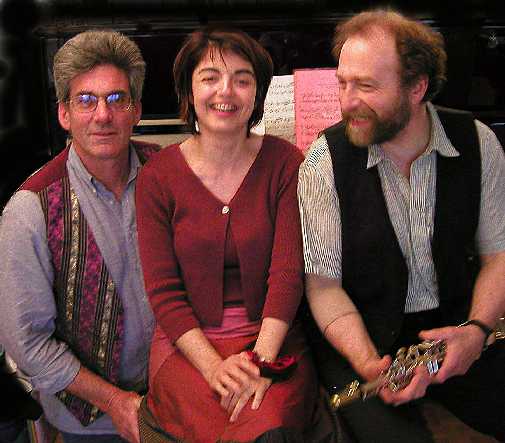 Up to that point, everything is all right… or almost… But you'll ask: 'What about my father's mother?' She rests in her last home, far from here, and God bless her soul!

But how shall I start to tell you where I come from? Starting softly, you know, is not in our tradition and as for arriving, nothing is played beforehand.

We are a bit the better off for it!

In the meantime, waiting for the answer, for the Messiah, for my (not already born) daughter's husband or for a new sewing machine, here are some tales. Some good Jewish tales. Tales from every wind that blows. Eventually family tales…

Like those people from whom I got them, these tales went on big journeys. They crossed many borders, many centuries, many traditions and… survived to oblivion. They crossed me and I offered no resistance. And that's how they framed me.

They are my ground. They are the flame that enlighten my night (and what a night, nowadays!). They are the breath that carries me to you. Here are my Jewish tales. Tales in music. I tell you! Because when words are missing, there is always a nigun, a little Jewish melody, to say "yom, tari tari, tam tari tari!"... and life goes on! Let's follow its marks!